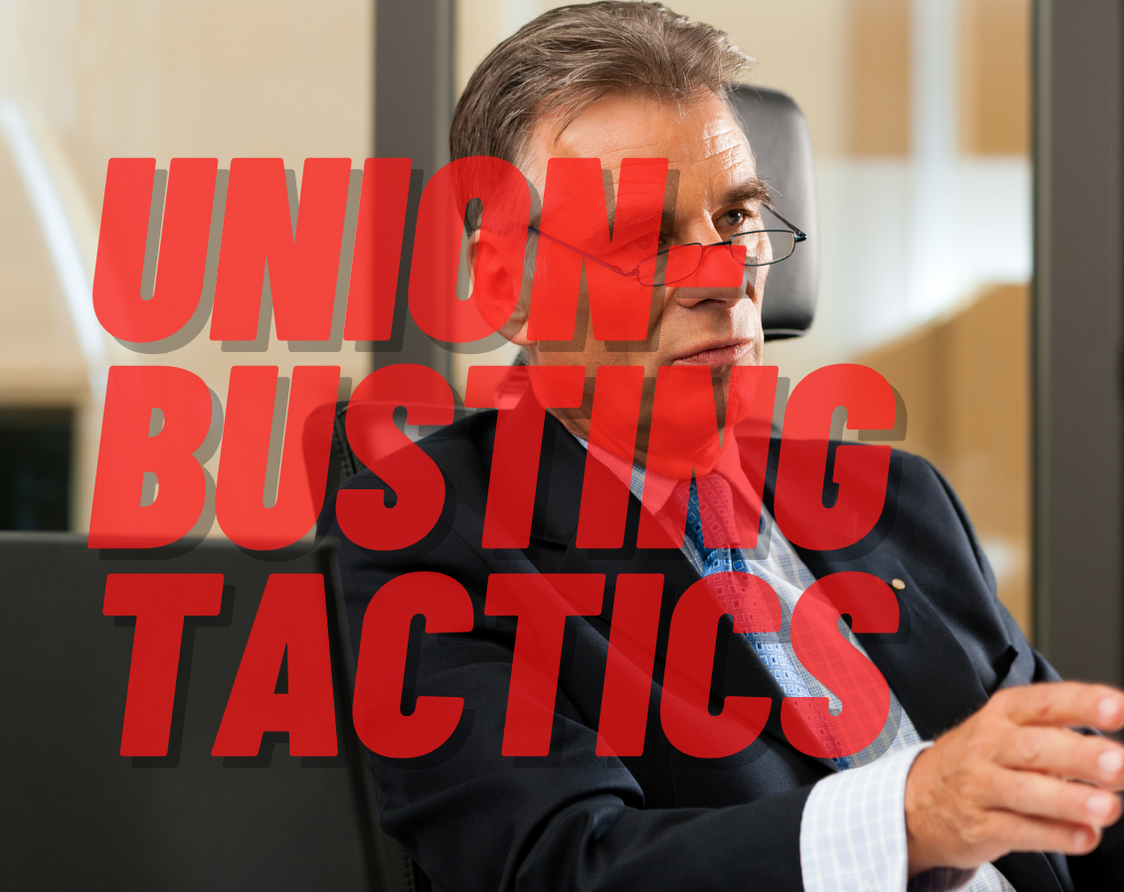 “Union busting is a field populated by bullies and built on deceit. A campaign against a union is an assault on individuals and a war on truth. As such, it is a war without honor. The only way to bust a union is to lie, distort, manipulate, threaten, and always, always attack.” – Martin Jay Levitt, 1993, Confessions of a Union Buster

I. The National Labor Relation Act

Before we dig into the vicious and illegal world of union-busting tactics, it’s essential to keep in mind that American workers have the legal right to unionize.

What law recognized the right of workers to join a labor union?

The United States enacted the National Labor Relations Act (NLRA) in 1935 to protect the rights of employees. Under the NLRA, employees are guaranteed the right to form unions, engage in collective bargaining, and take collective action. The NLRA also makes union-busting illegal.

II. What is Union-Busting?

There is a very profitable industry that has been built around silencing workers. High-paid consultants and lawyers call it “union avoidance,” but the rest of the world, including us, calls it “union-busting.”

Union-busting is an attempt by management to prevent employees from exercising their legal right to unionize. While union-busting is illegal, it’s also very common. A recent report found that employers spend over $300 million a year on union-busting efforts.

You have the right to organize a union to negotiate with your employer over your terms and conditions of employment. This includes your right to distribute union literature, wear union buttons t-shirts, or other insignia (except in unusual “special circumstances”), solicit coworkers to sign union authorization cards, and discuss the union with coworkers. Supervisors and managers cannot spy on you (or make it appear that they are doing so), coercively question you, threaten you or bribe you regarding your union activity or the union activities of your co-workers. You can’t be fired, disciplined, demoted, or penalized in any way for engaging in these activities.

Despite being illegal, many employers still try to prevent employees from exercising their right and freedom to join together in unions. Here are the most common tactics used by employers trying to bust a union:

The employer hires a union-busting consultant or agency

As stated earlier, employers spend over $300 million a year making rich lawyers even richer. Instead of negotiating with employees, union-busting employers will hire consultants and spend thousands of dollars per employee in an effort to illegally prevent them from exercising their right to unionize. Union-busting consultants lie, manipulate, and threaten workers simply trying to exercise their rights.

The employer launches an astrotuf campaign against the union

An “astroturf campaign” is exactly what it sounds like: a phony, fake attempt to mimic a grassroots movement. Employers will recruit a few anti-union employees to do their bidding and these employees will be lied to and manipulated. They will parrot the union-busting consultants’ talking points and distribute anti-union literature. Recently, union-busting employers even put money behind these astroturf campaigns, launch websites, and pay for advertisements in the community.

This is about intimidation. Pure and simple. Employees will be forced to have one-on-one meetings with management and even their union-busting consultants. The employer may also hold “captive audience” meetings, where employees are forced to attend meetings where they are forced to hear and listen to anti-union propaganda.

Like an abusive ex, union-busting employers will start promising change. However, the only way to guarantee real change and hold an employer accountable is through a union.

Union-busting consultants will tell employers to delay, delay, delay. Their highly paid lawyers will pervert the law to delay union elections and/or contract negotiations in an attempt to create a feeling of futility within the workforce.

Help us track union-busters with a monthly donation.