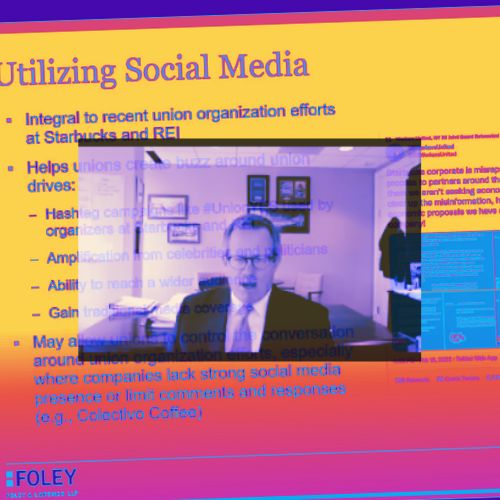 In March 2022, Foley & Lardner LLP uploaded a presentation to YouTube which was, in part, about how unions are "going after" progressive companies. According to Michael Ryan, one of the speakers, unions are doing this by using social media to spotlight the "progressive" companies fighting unionization and highlighting how this is contradictory to their values and themes. "That's not necessarily true," Ryan says.

Using examples from the union campaigns at REI, Starbucks, Colectivo Coffee, and No Evil Foods, Ryan says companies can "fight back" and provide a "defense" against unions by highlighting how a union would "impede" the ability of the company to have direct communication with workers, how unions will "want a say in everything" the company is doing, and how unions will add bureaucracy and cost.

Interestingly, these are all union busting talking points used by Mike Woliansky and Sadrah Schadel, co-founders of No Evil Foods, during the mandatory anti-union meetings they subjected their workers to.

The fact that union busting law firms recognize the effectiveness of the tactics and talking points used by No Evil Foods against their workers is all the more reason for union organizers to widely expose these tactics and work diligently to inoculate the working class against the rhetoric that will be used against them if they attempt to organize.