Sysco Employees Are Being Threatened And Even Arrested - LaborLab

Sysco Employees Are Being Threatened And Even Arrested 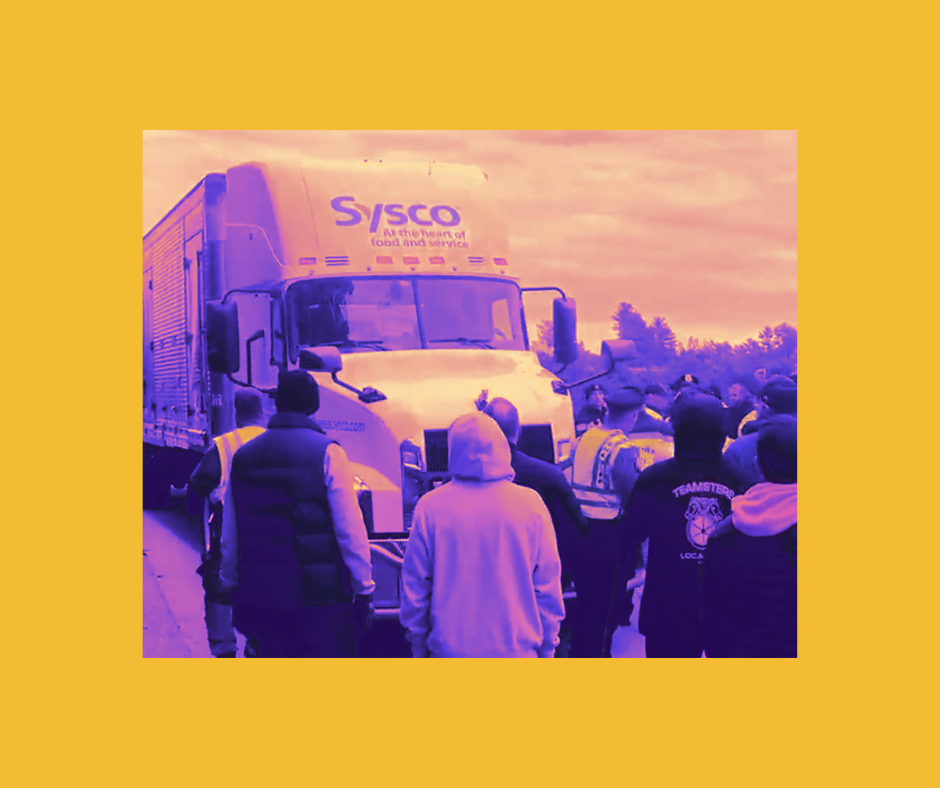 Members of the International Brotherhood of Teamsters, advocating for better working conditions, are being threatened by Sysco management and even arrested for exercising the right to strike.

Earlier this month, talks in Syracuse, NY and Plympton, MA between Teamsters and Sysco, the world's largest broadline food distributor, broke down. “Sysco pushes its workers to the physical brink as if they are disposable robots… No longer will we allow this coming to churn workers and then throw them away,” said Teamsters General President Sean O’Brien.

A recent Sysco report exposed the fact that nearly half of its employees have been on the job for less than a year. Sysco’s retention problems, due to poor working conditions and employer abuse, have drawn the attention of investors worried about the future of the company and Sysco CEO Kevin Hourican is under pressure to right the ship. However, the opposite is happening. In the last few weeks, employee relations have further deteriorated.

Teamster locals across the nation have sent letters of solidarity to their regional Syscos stating that they will extend picket lines beyond New York and Massachusetts if Sysco continues to bargain in bad faith, a violation of federal law. Sysco management has responded by threatening to fire workers, an odd strategy considering Sysco’s inability to retain workers is at the heart of the labor dispute.

In a letter sent to Teamsters Local 2 obtained by LaborLab, Sysco Vice President of Operation Bill Zink writes, “If associates engage in any strike, picketing, boycotting, stoppage of work, or slowdown in violation of our current collective bargaining agreement, they may be subject to discipline, up to and including termination. Your Local is putting your members’ jobs at risk by misleading them. Moreover, our company will pursue all legal claims and damage against Local #2.” The threatening letter was not just sent to Teamsters Local 2. An identical letter was sent to every Teamster local with a Sysco contract.

Zink’s final threat is especially poignant given the fact that the U.S. Supreme Court has agreed to hear a case that could create a federal law exception regarding strikes that “likely will trigger costly employer lawsuits against striking unions based on the economic consequences of their protests and spark legislation in conservative-leaning states to restrict union conduct during strikes, labor law observers said,” according to Bloomberg Law. The “US Supreme Court case has the potential to chill unions’ use of strikes as a bargaining strategy and tilt the balance of power in labor-management relations more toward businesses.”

To make matters worse, striking Teamsters in Massachusetts are now being arrested for exercising their labor rights.

Sysco’s aggressive anti-worker tactics are a pattern. Throughout 2022, LaborLab has reported on Sysco hiring anti-union “persuaders” throughout the country to conduct employee meetings intended to intimidate and coerce workers. Despite Sysco’s intense assault on the rights of their workers, the Teamsters show no signs of backing down.