What is the Form LM-21?  When a consultant enters a “reportable” (usually involving direct contact with workers) persuader arrangement with an employer, that persuader must file a Form LM-20 (Report of Arrangements and Agreements) within thirty days of entering this arrangement.  The Form LM-20 must be filed electronically and is posted online at the Office of Labor-Management Standards (“OLMS”) Public Disclosure website.

In addition, if the consultant files one or more LM-20 forms in their fiscal year (usually January 1 to December 31), then they must file an annual report Form LM-21.  The Form LM-21 must also be filed electronically and is due ninety (90) days from the closing date of the consultant’s fiscal year.   It too can be viewed online at the OLMS Public Disclosure website. This annual report is divided into several parts.  Part A contains basic information about the consultant, their address and contact information and signature lines that the president and treasurer of the consulting firm must sign.

Part B itemizes payments received by each employer with whom they engaged in reportable persuader activities during the fiscal year.  Part B contains information about key disbursements, such as salaries and other payments.

The Form LM-21 is a valuable disclosure of all the employers with whom a persuader had a “reportable” persuader relationship with during the year (Receipts portion of Part B) and how much they received, as well as payments made to subcontractors and other organizations in connection with their reportable persuader activities (Disbursement portion of Part B.)  It provides an important crossmatch against employer LM-10s:  after all, if an employer is listed in the LM-20 and the LM-21, then that leaves little room for doubt that the employer needs to file an LM-10.

What does the Special Enforcement Policy do to Form LM-21 filing?  On April 13, 2016, OLMS adopted a Special Enforcement Policy which indicates they will not enforce the reporting requirements of Parts B and C.  In other words, consultants still must file the annual report and complete item A at least, but completing Parts B and C is optional.  So, at best, persuaders who file Form LM-21 can complete all the sections or they can opt just complete Part A, as the following example demonstrates.  In this example, the persuader specifically references the Special Enforcement Policy in Part B and enters zeros in Part C.  Honestly, besides meeting the filing requirement, this LM-21 form provides little usable information and represents a failure of transparency and disclosure, as well as forfeiting valuable enforcement opportunities. 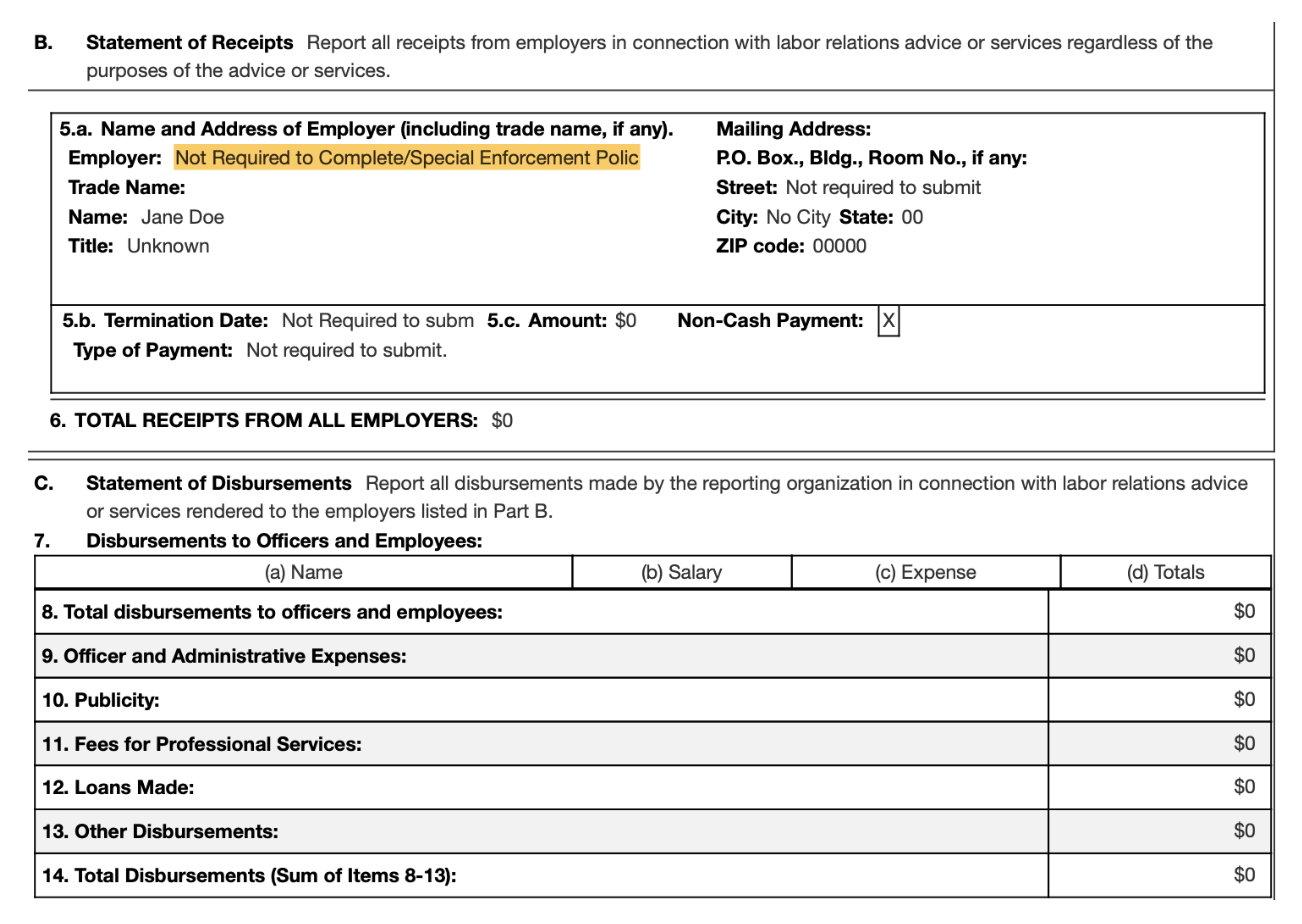 Because the filing of just one LM-20 form requires the filing of an LM-21, using 2021 filing data, we compiled a list of 91 unique LM-21 filers.  In other words, these were consultants who during 2021 filed at least one LM-20.  Unfortunately, this list does not include a list of subcontractors reported on LM-20s filed in 2021 by persuaders.  Subcontractors, who are not employees of the persuader (think:  independent contractors versus employees), must also file their own LM-20 for that persuader activity and in addition, must file an LM-21.  We are just now beginning to analyze data of all persuader employees and subcontractors reported in 2021 and hope to publish results soon.  But for now, let’s assume there are at least ninety-one consultants required to file LM-21 reports.  For each unique consultant generated on this list, we checked the OLMS Public Disclosure web site to see if any LM-21 for 2021 had been filed.  As of September 16, 2022, forty-seven (47) of those on the list hadn’t filed an LM-21 for 21 and only 44 had.  Keep in mind that the LM-21 is due 90 days after the end of the consultant’s fiscal year, which in most cases runs from January 1 to December 31.

This is a very high rate of non-compliance; over half the consultants who filed an LM-20 in 2021 haven’t yet filed an LM-21.  And of the forty-four who did, only 14 still itemized receipts in Part B.

We entered all the employers named by these fourteen persuaders into a spreadsheet and found there were reports, including total payments in the fiscal year and date of last payment, from 105 employers.

On the other hand, the Form LM-21 is a persuader report and will only report payments from an employer.  So, if one of the four persuaders hired by the employer files an LM-21 and details payments received from that employer, but the other three persuaders do not file itemized LM-21 reports, we will only have a partial picture.  The fact remains:  you cannot establish how much an employer pays persuaders from the LM-21.  The Form LM-10 is the only comprehensive way to determine how much persuader spending occurred.  But what if the employer doesn’t file an LM-10 but one of the four persuaders file an LM-21 and reports payments they received from that employer?  Then, together with Form LM-20, we have very convincing proof that the employer has failed to file their Form LM-10.  In other words, by not requiring Part B to be filled out, OLMS has thrown away an important enforcement tools and those who want to better understand the persuader industry, have lost a valuable source of information.

There is one final note here.  Our listing of employers was checked against LM-20 filed and we learned that many persuaders had not filed LM-20s for 2021 even though they reported receiving payments from those same employers.  Here is yet another enforcement tool that OLMS has forfeited by virtue of the special enforcement policy.

OLMS has never explained or justified this policy.  There was no reason for it then or now.

OLMS filing data shows that the number of LM-21s filed each fiscal year has steadily decreased since 2016 and by 2020 was down to just 32.  It took a slight upturn in 2021, but the trends are not encouraging.

Nobody except the persuaders themselves know exactly why LM-21 filings are down.  If you were a persuader and found out that you only needed to fill out one small part of the Form, would you bother to file it?

The persuader industry is clearly changing, relying more heavily on independent contractors instead of employees, much as many other industries have already done.  If we’re going to gain a better understanding of these changes, we need greater transparency and disclosure in the Form LM-21 and the LM-10, not less.  By the same token, OLMS is going to need all the compliance tools in its toolbox to identify delinquent and non-filers and get them to file.

Rescinding the Form LM-21 Special Enforcement policy is a major step towards transparency and disclosure, and it will help OLMS achieve greater reporting compliance.  There’s a reason it’s the Labor-Management Reporting and Disclosure Act; reporting requirements for labor and management should not be out of alignment like this.  Imagine the outcry if a Special Enforcement Policy was announced that advised union filers they didn’t have to complete major portions of their LM-2 report.

Rescinding the policy won’t require any formal rulemaking.  It simply requires that the policy be taken down from the website.  If you agree, we ask that you to sign our petition requesting the Office of Labor-Management Standards rescind the OLMS Form LM-21 Special Enforcement Policy. 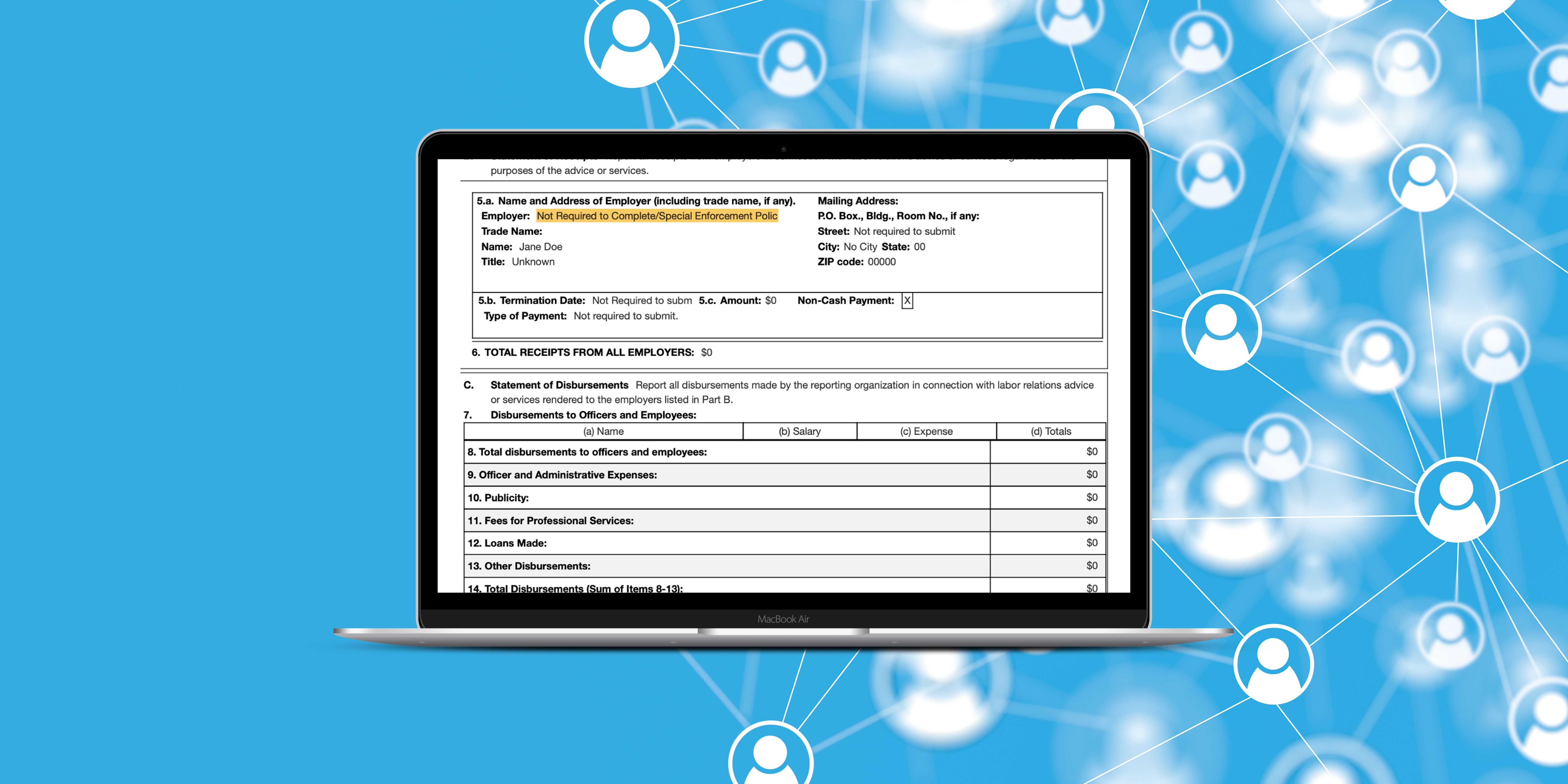 To the Office of Labor Management Standards:

We, the undersigned, request OLMS rescind the Form LM-21 Special Enforcement policy. Doing so would be an important step towards achieving greater transparency, disclosure, and  reporting compliance in regards to the activities of reportable persuader arrangements.

Rescinding the rule does not require any formal rule-making or other administrative action. It simply requires that the policy be taken down from the OLMS website.

This petition will be delivered to OLMS.

This petition will be delivered to the Office of Labor-Management Standards (OLMS) on November 1, 2022.