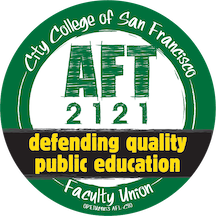 On January 3rd, classified CCSF workers lost their jobs and livelihoods. The District issued 67 layoff notices in December with no respect to seniority, causing bumping and chaos. At the end of this process, 42 workers were laid off.

AFT 2121 stands with our classified colleagues to express our sorrow and anger at this cruel and unnecessary loss. It’s an attack on essential members of our community and ultimately on our students, who depend on classified staff to make CCSF run.

At the bargaining table, SEIU and District negotiator Dianna Gonzales had crafted a deal that would have saved the money the District was seeking through furloughs. But the District turned its back on the deal and on the workers. Chancellor David Martin chose layoffs, as he made clear in his email to the school last Monday.

This is illegal regressive bargaining. More importantly, it’s a clear statement of values from the CCSF Trustees and the chancellor. This administration chooses layoffs and cuts, even when they have other options. Faculty are facing this too. David threatened further unneeded faculty layoffs and class cuts to take effect Summer 2022.

All of these decisions are choices. The CCSF Trustees and Chancellor are choosing to respond to the state’s chronic under-funding of public education with layoffs and cuts instead of leadership and vision.

As your union made clear with the AFT alternative budget, the District has no budgetary justification for layoffs at this time. Projections of the State budget look hopeful. City funding is a real possibility. The CCSF Revenue Unity Coalition is a historic partnership of AFT 2121, SEIU 1021, and the Building Trades Council, working together to advocate for the local funding our college needs to sustainably meet the demand of our students and our city. Deputy Chancellor Dianna Gonzales had been working with us as well. At the last Board of Trustees meeting, the Board and Chancellor Martin effectively fired her, but the work of securing long-term funding continues with our labor siblings and community allies.

Fortunately for us, there’s a new day in local and national discussions around public education, and the CCSF Revenue Unity Coalition will continue with added clarity and urgency about who and what we fight for. From City Hall to DC, there’s renewed interest in building up the hopes and dreams of our students and our communities, and that’s exactly what we as a collective will do.

We will not sit by while our students and colleagues are thrown out the door. At December’s Delegate Assembly, your organizing team presented a campaign timeline–it’s a plan to win, and I urge you to take an active role in it. This semester will not be business as usual. If we want San Francisco to have a functioning community college, we have work to do. That means you!

San Francisco City College been added to our Union-Busting Tracker

Our mission is dependent on YOU. Help us to keep empowering workers and exposing the union-busting industry. Donate here >>>