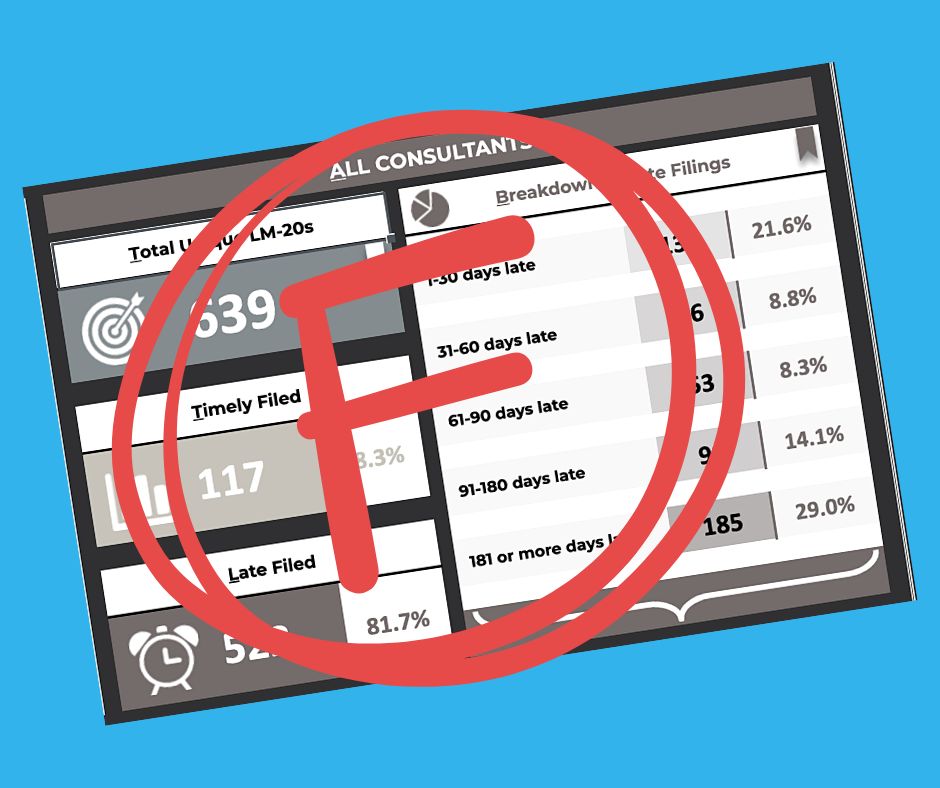 Under federal law, anti-union "persuaders" are required to disclose certain activities on a form Form LM-20 in a timely manner to the Department of Labor. According to a first-of-its-kind analysis conducted by LaborLab of LM-20 filings since January 1, 2021, over 82% of anti-union persuaders violate the timeliness requirement, giving them an unfair and illegal advantage over workers attempting to form unions. The longer it takes the consultant to file, the more workers remain in the dark about who is making often erroneous and misleading statements about the union.

Key takeaways from the LM-20 Scorecard:

Our nation is facing a crisis when it comes to holding the secretive union-busting industry accountable to the public, workers, and the law. LaborLab’s LM-20 Scorecard makes the lack of compliance by most union-busters accessible to the public, regulatory agencies, and policy makers.

By creating a 30-day filing deadline, Congress recognized that for the information reported on the LM-20 to be useful and serve its purpose, employees needed to be informed in a timely manner that their employer had hired union-busting consultants.

In a recent blog by Jeffrey Freund, Director of the Office of Labor-Management Standards, wrote, “The purpose of consultant reporting is to balance the information: to alert workers and unions that there is an outsider ‘working the room’ for the employer, whether directly or indirectly… To be meaningful, then, these consultant Form LM-20 reports must be filed close in time to the organizing activity the consultant is hired to resist – as Congress requires.”

Freund’s analysis is correct and points to an incentive for union-busters to ignore the law: it’s advantageous to them and their clients to keep the details of their anti-union campaigns a secret as long as possible.

LaborLab is a labor rights research and reporting center. In 2021, LaborLab began tracking anti-union persuader activities throughout the United States and in 2022 started calling on improved transparency rules from the Department of Labor and Office of Labor Management Standards.

LaborLab’s LM-20 Scorecard is hosted in Google Sheets. If you have any issues with access, please email [email protected]