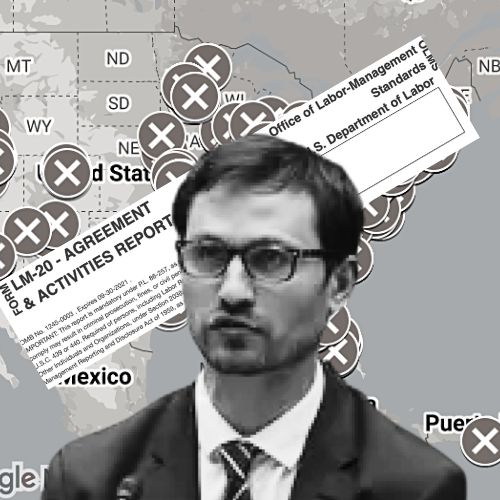 Under the Labor Management Reporting and Disclosure Act (LMRDA), union-busting consultants (also referred to as “union avoidance consultants” and “labor relations consultants”) must disclose to the U.S. Department of Labor when they’ve been hired by an employer to directly or indirectly persuade workers against forming a union. They must do so within 30 days on a Form LM-20. Less than 20% of union busters comply with this rule. In fact, the number is likely even lower - much lower.

Trey Kovacs is a self-proclaimed “labor expert.” His primary gig has been as a policy analyst at the Competitive Enterprise Institute (CEI). According to right-wing Influence Watch, “CEI publishes right-leaning research and analysis on a range of policy issues, including energy and the environment, technology, labor, and economic regulation.” He’s also a regular contributor to ALEC and Mackinac Center.

Under the Trump Administration, Trey Kovacs went to work for the Office of Labor Management Standards (OLMS) - a branch of the U.S. Department of Labor (DOL) charged with enforcing the LMRDA. His main claim to fame there was his attempt to regulate worker centers the same way as unions are regulated.

After Trump lost in 2020, Kovacs went into the lucrative business of union-busting. Most union-busters (i.e. “persuaders”) are paid between $300 and $1,000 an hour plus expenses.

Kovacs obviously understands the LMRDA and its disclosure rules - heck, he wanted to expand the rules beyond their legal jurisdiction. So, it’s “strange” that since Kovacs left DOL to become a union-buster, he’s been ignoring the law and failing to notify U.S. DOL of his activities.

As reported by Vice back in the summer of 2022, Kovacs was one of the folks hired to union-bust Amazon employees. We only know this because of Vice’s reporting, because Kovacs failed to comply with federal law (the same federal law he was charged with enforcing and tried to expand at DOL). In fact, according to the LaborLab database, Kovacs has NEVER filed with the Department of Labor even though he appears in other union-buster's reports. For example, Trey Kovacs union-busted for SW Steel USA Ohio, but the only reason we know that is because Kovacs was identified in a report submitted by another union-busting firm.

We know this because LaborLab scrapes every single OLMS filing every day and records it in our database. You can view our database here.

The LMRDA was written so that workers would be notified when their employer hired a union-buster. This was to ensure workers could make an informed decision based on the facts. However, the U.S. DOL's enforcement of this rule is lacking and that's putting it generously. According to analysis conducted by LaborLab of LM-20 filings since January 1, 2021, over 82% of anti-union persuaders (“union-busters”) violate the timeliness requirement, giving them an unfair and illegal advantage over workers attempting to form unions.  Many more never file at all. The longer it takes the consultant to file, the more workers remain in the dark about who is making often erroneous and misleading statements about the union.

Kovacs’ filings aren’t even late. They are non-existent.

What signal does it send to workers when a former U.S. DOLr employee doesn’t even play by the rules? Doesn’t this just encourage other union-busters to ignore the law and deny workers and the public our rights? The situation is already out-of-hand.

According to a survey of hundreds of worker rights advocates recently conducted by LaborLab (to be released soon), between 86% of respondents “think a union campaign would be more likely to succeed if workers were notified when a union-buster is hired.”

This crisis of accountability must be addressed.