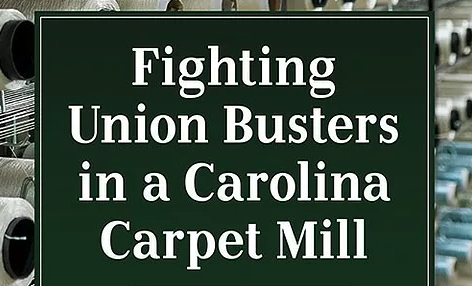 Phil Cohen is one of the most effective and celebrated organizers to have ever set foot in the south -- a region of the United States not necessarily known for its friendliness towards unions and union organizers. Now Cohen has a new memoir out and we highly recommend it!

Here's a blurb for Fighting Union Busters in a Carolina Carpet Mill: An Organizer's Memoir

In 2017, Workers United/SEIU called veteran organizer Phil Cohen out of retirement to investigate and expose an illegal union-busting plot by Mohawk Industries at its North Carolina carpet mill. His hard-hitting account chronicles the resulting labor dispute that rocked a Fortune 500 company.

The organizer had to prove management was behind an unlawful decertification petition and forced workers to sign using strong-arm tactics. Though terrified of retaliation, witnesses gradually agreed to testify before federal agents. Mohawk retained a high-powered union-busting attorney who appealed directly to Trump-appointed heads of the National Labor Relations Board, while Right to Work Committee lawyers framed the issue as a test case to revoke laws protecting employee rights since 1935. The union's only hope rested on presenting evidence too formidable for political bias to surmount.

This memoir, infused with dry wit and insights into human nature, blows the lid off the nation's union-busting epidemic, and thrusts readers into the tumultuous environment of a union hall in crisis.

Click here to get a 40% discount on Fighting Union Busters in a Carolina Carpet Mill: An Organizer's Memoir

Inspired by Cohen and ready to get information on contacting a union organizer? Click here.