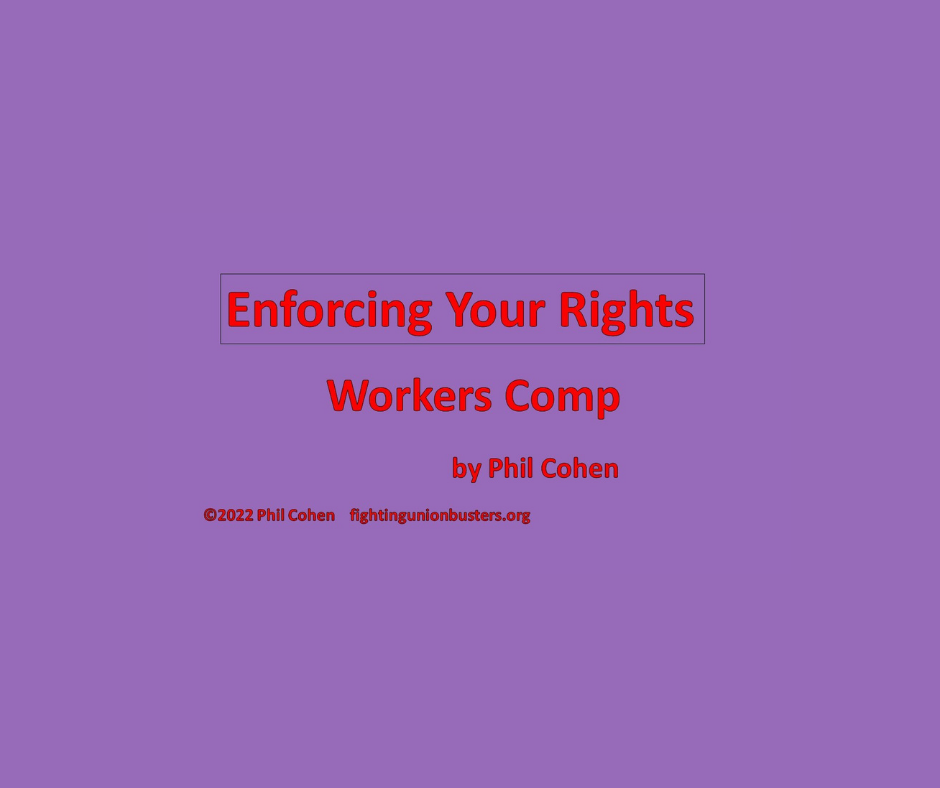 He’s represented 1,000’s of workers not only in grievance & arbitration, but in every area of employment law. In this workshop, Phil explains your rights under workers comp, how companies routinely violate them, and how workers can fight back and win.

This legendary organizer’s latest book Fighting Union Busters in a Carolina Carpet Mill is an action-packed memoir about how he and a determined union local brought a Fortune 500 company to its knees.

Phil Cohen's Workers Comp: Enforcing Your Rights can be listened to right here:

(or scroll down to read transcript)

My name is Phil Cohen. I’m Special Projects Coordinator for Workers United/SEIU with 30 years in the field.

A union’s job doesn’t stop with negotiating and enforcing contracts. We also educate workers about their rights under state and federal law, and represent them when those rights are violated.

Every company I’ve dealt with is crooked when it comes to workers comp, and deliberately confuses employees about their rights.

Workers comp is a mandatory insurance policy for all employers….. providing extensive benefits to injured workers. It’s regulated by individual states rather than the federal government, meaning the exact wording of the law varies by state. But the key principles are pretty much the same.

If you get injured at work – anything worse than a paper cut – inform your HR Department and request a workers comp claim form. Here’s why:

You may be wondering at this point why a big corporation and its insurance company would negotiate a settlement with your lawyer. That’s because if an agreement can’t be reached, there’s a hearing before your state’s Industrial Commission. Their decision is subject to appeal all the way up to the state supreme court.

The cost of lengthy litigation is often what motivates insurance lawyers to cave in and offer a generous settlement. It simply becomes less expensive to buy you off than continue to fight.

Under the law, unions can’t directly represent employees in a workers comp case. But unions can and do:

Now that I’ve explained your rights, we need to discuss all the ways management will try to get around them:

Let’s take a look at various types of injuries. Many industrial injuries are the obvious result of a serious accident, witnessed by co-workers. There’s no grounds to dispute these are job related. But some of the most serious injuries come on slowly. Management and their insurance company often argue these problems were not caused by work:

How the Game is Played

Understanding the law is important, but knowing how to play the game to make it work for you is what truly makes a difference.

Within our system of justice, everything you say can and will be held against you. Presenting things the right way is the road to victory. If you’re in a union, try to have a union rep present when you file a workers comp claim and get interviewed by management. There are some basic things to be mindful of:

That was an in introduction to your rights if you get injured at work. I wish you strength and power enforcing these rights.

In addition to being a union organizer, I write books about my exploits in the field. My latest book, Fighting Union Busters in a Carolina Carpet Mill, was released by McFarland & Company. It’s about a campaign I recently directed, investigating and exposing an illegal union busting plot by a Fortune 500 company. During the process, I became involved in gut-wrenching workers comp cases, and the story explains how the tactics we discussed today played out in the real world.

The best place to get it is my website, fightingunionbusters.org

I’m passing on my 40% author’s discount to working people, making it available for only $11.99, and including a free CD of working class music.

I’d like to thank Mark Gevaart, host of My Labor Radio, for his recording and production services. You can listen to his outstanding podcasts by following the links at mylaborradio.org