Enforcing Your Rights with Phil Cohen 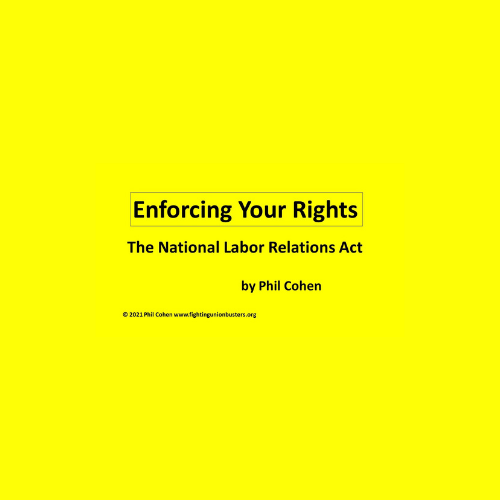 Phil Cohen is one of the most effective and celebrated organizers to have ever set foot in the south -- a region of the United States not necessarily known for being sympathetic to union organizers. Cohen's most recent book - Fighting Union Busters in a Carolina Carpet Mill: An Organizer's Memoir - is riveting and a must read, especially for anyone who has been part of an NLRB fight or is interested in learning more about how working people can push back on corporate power. It's for these reasons we're so excited to offer the following workshop prepared and presented by Phil Cohen: Enforcing your Rights.

Phil Cohen's Enforcing Your Rights workshop can be listened to right here:

A transcript of the workshop follows:

My name is Phil Cohen. I’m Special Projects Coordinator for Workers United, an affiliate of SEIU. I’ve spent 30 years in the field assigned to the most difficult situations. One of my specialties is investigating and exposing illegal union busting - by presenting evidence to the National Labor Relations Board. I also write and publish books about my exploits. I’ll provide more details about that when we wrap-up.

The biggest secrets in America are the laws that protect working people. They don’t teach that in school and you’re sure as hell not going to learn about them from an employer. The ONLY way workers get educated about their rights is if they have a union. And knowing your rights is only half the challenge. You then have to learn how to enforce them.

Bottom line: It violates federal law for employers to interfere with those rights. Management is required to remain neutral regarding the free choice of workers to have a union.

They’re prohibited from threatening or coercing workers for union activity. It’s illegal for them to show favoritism to anti-union employees and discriminate against pro-union employees. I’ll explain how this plays out in the real world during the next few minutes.

Illegal union busting on a plant-wide scale usually takes place under 2 circumstances: Workers are trying to form a union; or management is trying to get rid of an existing union. Here are their six most common dirty tricks (legally referred to as unfair labor practices)

If these illegal activities are taking place where you work, immediately notify your union organizer. An experienced union rep, or a union lawyer, will file charges with the NLRB.

Your job then becomes gathering evidence to back up the charges. Under our system of justice, people are innocent until proven guilty. That includes management.

I’ve had some of the biggest corporations in America busted by the NLRB. But I couldn’t have done it without a dedicated group of workers investigating inside the plant and finding witnesses.

There are several things you need to understand about evidence:

Your job is to identify witnesses and convince them to meet privately with a union rep or lawyer. If their information is good, the union will present them to an agent of the NLRB to give a sworn affidavit. Someone else telling an agent what the witness told them doesn’t count. It’s hearsay.

Many witnesses will be frightened. That’s the whole point of company tactics. It’s critical to understand and explain their rights:

Let’s talk about the kind of evidence needed to prove the various types of violations:

Allowing anti-union workers free run of the plant during working hours: We need to prove management knew and didn’t take action to stop and discipline them. That means we need multiple witnesses saying they saw management observing the activity.

Management privately coercing workers to not support the union: We need people to testify about discussions management had with them.

TACTICS FOR A SUCCESSFUL NLRB INVESTIGATION

Conduct your investigation as a covert operation:

So, that begs the question, WHAT DOES THE NLRB ACTUALLY DO IF WE HAVE A GOOD CASE?

So, that’s an introduction to your federally protected rights to unionize. The rest will come with time, experience and hopefully having a good union rep. I wish you strength and power enforcing your rights.

As I mentioned at the beginning, in addition to being a union organizer, I’m an author. If you’d like to read a hard core, real-life drama about how what we discussed today was put into action during a campaign I recently directed…..one that brought a Fortune 500 company to its knees….. despite support from the Trump administration, check out my new book: Fighting Union Busters in a Carolina Carpet Mill, released by McFarland & Company at the end of 2020.

In closing, I’d like to thank Mark Gevaart, host of My Labor Radio, for his recording and production services. You can listen to his outstanding podcasts by following the links at mylaborradio.org.