How much money are US employers spending on reporting agreements or arrangements with persuader consultants?  Given the fact that such reportable transactions must, by law, be reported on a publicly-available form available on the US Department of Labor’s Office of Labor Management Standards Online Public Disclosure Room, this should be an easy question to answer.  While the persuader consultant must report the existence of such a reportable arrangement within 30 days and file publicly available Form LM-20, the employer files an LM-10 report by 90 days after the close of their fiscal year.  The LMRDA, OLMS regulations and even the Form LM-10 and LM-20 instructions make it perfectly clear that if an LM-20 is filed, the employer is obligated to file an LM-10.

According to OLMS data, the number of Forms LM-10 and LM-20 filed with OLMS have dropped significantly beginning in fiscal year 2017. 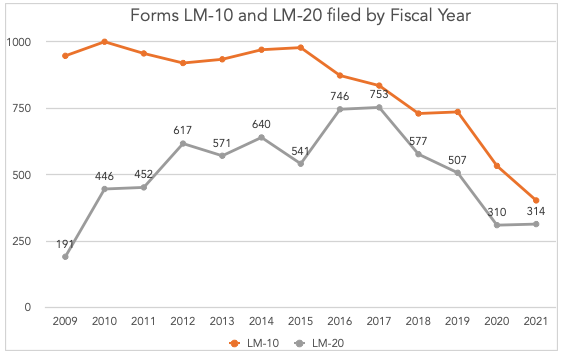 A recent analysis of Form LM-20 and LM-10 data for the year 2021 found more disturbing news:  Only 18% of LM-20 forms were filed within the thirty-day filing deadline.  It’s relatively easy to ascertain whether the form is timely filed by comparing the filing date (Forms LM-10 and -20 must be filed electronically since 2020) and the date of the arrangement.  This is indeed regrettable because the LM-20 provides notice to workers and unions involved in an organizing campaign that the employer has retained a persuader and under what terms and conditions

Item 10 of the LM-20 is supposed to report the terms and conditions (the hourly or daily compensation for services); any written agreements must also be attached to the Form LM-20.  The same analysis of 2021 LM-20 filings revealed that roughly one quarter attached a written agreement.  Over half failed to report a single dollar amount.  Instead of providing dollar amounts, many of these reports simply provided boilerplate phrases like “provide consulting services to the client with respect to an NLRB sponsored RC election.”  Between delinquent and deficient filings, value of the LM-20 is plummeting.

What about the Form LM-10?  Even though it’s usually filed long after the election is over, the form must itemize all payments to all LM-20 filing consultants.  LM-10s filed for 2021 show that over $26 million was spent by employers for reportable persuader agreements.  Unfortunately, nearly 90 employers, for whom a persuader agreement was reported by persuaders in the LM-20, have still not yet filed an LM-20, which should have been done so by the end of March of 2022.  These data have been shared with OLMS and we hope for prompt corrective action.  All we’re asking is for employers to comply with the law.