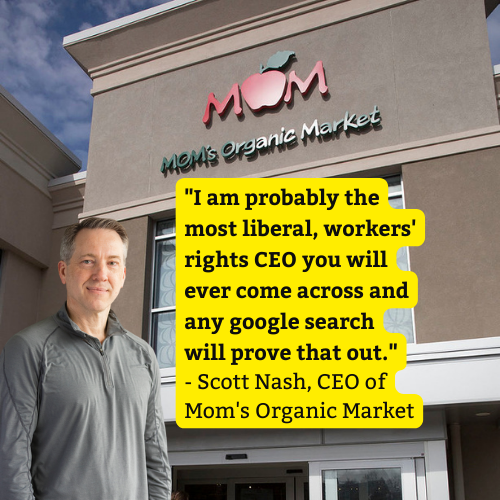 The following report is from Jon Reynolds. Reynolds is a freelance writer and organizer. His work can be found in publications such as the Asheville Free Press, Industrial Worker, and Facing South. He also hosts the 43-15 podcast with Meagan Sullivan.

On July 23, I emailed Scott Nash, the CEO of Mom's Organic Market, about his stores carrying products by my former employer, No Evil Foods.

Considering Scott has an entire section on his website devoted to supporting social justice causes, I assumed he would care that No Evil Foods busted a union effort, targeted and/or fired myself and others for organizing, paid thousands in a labor board settlement, and later laid off their entire production team without warning or severance and outsourced jobs to a co-packer in a different state.

I ended the email by apologizing "for the bad news but I thought if you didn't know about this you might want to."

"That ‘bad news' is fake news- put out by unscrupulous union activists- who should be ashamed of themselves for the misinformation they routinely disperse.  Candidly, one of the biggest problems with humanity these days are the people who read something on the internet and automatically believe it because it supports their worldview..."

Trying to remain diplomatic, I responded by asking Scott what was fake news, by reminding him that No Evil held seven mandatory anti-union meetings and paid over $40k in a labor board settlement as a result of their union busting, and I closed with this:

"Candidly, one of the biggest problems with humanity these days are companies that advertise themselves as champions of social justice while supporting the active destruction of the working class because it benefits their bottom line."

Scott responded by agreeing that corporate greed is a problem, but then says later in the email that while "corporations suck, so do unions, often for the same reasons and in the same way."

He also asks if I support police unions. (No.)

I ask him, again, to tell me which of my claims are fake news.

I remind him that there is overwhelming evidence supporting all of my assertions and ask him if he wants links and sources so he can do more research on what happened at No Evil.

And I close out the email by expressing my confusion as to why "someone who has an entire section of [their] website devoted to supporting social justice causes would defend a company willing to treat their workers this way."

I send him a video recording from one of the anti-union meetings held at No Evil.

I send him links to reports by Jacobin and VICE on No Evil's NLRB settlements.

I send him links to reports on the mass layoffs at No Evil.

I send him a link to an op-ed I wrote about my experience, and a link to two podcast interviews with former NEF workers.

I close the email with this:

"Even if you're against unions, I am struggling to understand the lack of empathy for the workers who fought for better conditions after COVID and/or the workers who were fired without warning or severance so No Evil could outsource their jobs to a co-packer to cut costs.

I hope this is a good starting point for research. Please let me know if you have questions."

These emails have carried on for a few days at this point, and finally today, July 27th, I receive this response:

"Thanks for sending.  I'll take a look- and we are considering action.  However- I take offense with your assumption that because I think Union tactics are unscrupulous that that somehow leads to me now not having empathy for workers???  Stop putting words in my mouth.  I am probably the most liberal, workers' rights CEO you will ever come across and any google search will prove that out."

Your usage of 'unscrupulous' described 'union activists' not 'union tactics'.

So when you use a word that is defined as 'having or showing no moral principles; not honest or fair' to describe union activists (workers) surely you can see how this comes off."

I then try to move the conversation forward, telling him again that I look forward to his response regarding all of the links and information I sent.

"I see where there is room for miscommunication in this exchange.  You and I are obviously on the same page when it comes to supporting workers, it's just a matter of how to best get there.  I think unions have played an amazing role in history when it comes to workers' rights.  Just as you have been on the organizing side of things- our experiences are polar- as I too have direct experience with unions- as they attacked us with outright lies in Philly while my 1000+ employees worked their asses off under great stress during the height of the covid crisis- trying to keep people safe and fed.  The unions got their media contacts and political contacts to condemn us without any of them ever reaching out to us directly to confirm that what they were hearing was true or false.  It was heartbreaking, actually- as a supporter of workers- to be targeted.  So you can see why I might be wary of claims."

Now, I had merely emailed Scott to tell him he was carrying products in his store from an anti-union brand, but here he is encouraging me to look up what happened with his workers in Philly at the start of the pandemic.

So I start Googling, and I learn that Mom's workers in Philly were reportedly upset because Scott didn't want to limit the number of customers in his stores.

"Employees participating in the protest said they attempted to raise concerns internally before staging a public action," a PBS affiliate wrote in 2020.

"I am pessimistic about ours or anyone's ability to prevent humans from getting within 6' of each other," Scott wrote in a 2020 email. "When all this began the World Health Organization's recommendation was 3'."

The PBS affiliate concluded their article with this:

"Over the next four days, employees from various locations chimed in, replying all to company wide emails with questions about limiting flows in the store and leave for immunocompromised workers.

'It is inappropriate for you and others to be blasting all employees with your opinions and anxieties,' responded Nash."

I respond to Scott's email by writing:

Thanks for bringing the Philly situation to my attention, as I hadn't heard about this before.

If you have any other questions about No Evil Foods, please let me know."

I include a link to the article I found.

Throughout the course of these emails, I am having them shared with Twitter.

And today, the 27th, I learn that workers at Mom's in Baltimore filed to unionize.

I quickly return to Gmail to congratulate Scott on the news, but more importantly on his opportunity to definitively show the world he is the "most liberal, workers' rights CEO" I'll ever come across.

Jon Reynolds was part of an organizing drive at a company called No Evil Foods, where he helped with unionization efforts and, at the start of the pandemic, helped organize a petition for guaranteed hazard pay. While this organizing activity resulted in Jon being fired, he was ultimately awarded a settlement after filing with the NLRB.